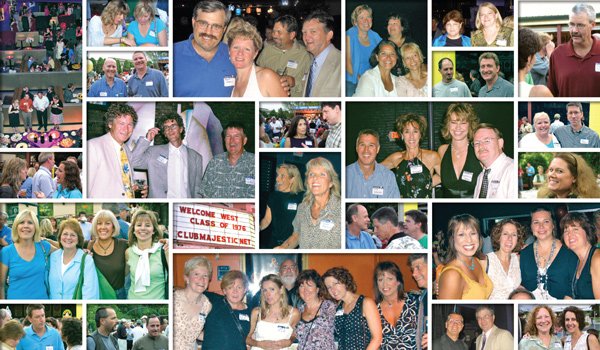 Starting off with Friday night, July 21st, 2006 we had a large crowd of West & Edgewood classmates show up at the Capital Brewery Beer Garden despite the gray skies and colder temperatures (which probably helped keep the local crowd small – making more room for us to mingle!). The beer garden closed at 9:00 and the majority of the crowd found their way to the Middleton Sport Bowl. The upper rooms became crowded as many wanted to keep sharing stories with old friends into the night.

We heard many comments that it was great to include Edgewood as many classmates attended elementary and middle school together. It was suggested we make the Capital Brewery gathering an annual event (the same weekend every year) in the summer for both schools and whoever is in town could drop in. Please send feedback on this suggestion – including a suggested date (ex. meet the 2nd Friday night in July every year) to: 76missing@regents76.net.

Saturday night, July 22nd at the Club Majestic was well attended. Once people became acclimated to the layout of the club, they found places to enjoy conversations with old friends and mingle to see who they could recognize, gather at the wonderful and abundant buffet of food or, later in the evening, find their way to the dance floor and rock to 70’s music…just like we did 30 years ago!

Midway through the event, our very own Jay Russell “MC’d” and spoke on the following:

Awarding of two $750 scholarships to the Class of 2006. The two recipients of the scholarships were Hannah Ellstrom-Calder and Siarhei Biareishyk.
The donation of $500.00 made to the Second Harvest Food Bank in memory of our deceased classmates. The list of deceased classmates was read bringing a hush over the crowd. Sadly the list keeps growing. For a list of the names please see the “Memories” tab.
Website news – we will continue to maintain our website: regents76.net. Please save as a favorite and remember to update information as it changes (physical and email addresses, phone numbers, etc.) or email us at 76missing@regents76.net if you have found someone from our missing alumni list or to report the passing of one of our classmates.
“Home of the West Regents – Class of 1976” plaque. We would like to refurbish the plaque as it looks very worn. While we have been in touch with the school, no decisions have been made as of yet. Updates on the plaque will be posted on the website once we have plans in place.

Last but not least, a big thank you to the reunion committee. It’s not a small task to put on a reunion, but thanks to a dedicated group, we were able to divide and conquer the many tasks for this reunion. Your reunion committee consisted of: Michael Baer, Marge (Howe) Wagner, Laurie (Johnson) Alioto, Ann (Lange) Heckendorn, Karen (Maly) Emmrich, Mary (Olig) Drifke, Cathy (Pitot) Genin, Jeff Porter, Jay Russell and John Schultz. If you run into any of these folks, please extend your thanks.

[Not a valid template]